Russian Rhapsody is a Destination Management Company known for its creative events and incentives. We have a separate department for leisure travel and would be delighted to assist. Russia is a country so large, that it stretches over seven different time zones. Russia has enormous contrasts in its landscapes, cultures and richness. Russia's beautiful Moscow and St Petersburg are chock-a-block filled with history, culture and beautiful architecture. Nature here is simply overwhelming, imagine snow filled vistas, wild animals and stunning landscapes. Did you know you can see the Northern lights in Russia? This combination makes Russia a great incentive destination with innumerable possibilities. At Russian Rhapsody DMC we would love to assist you with our great program ideas.

Further down the page: Read about our company . There is also a map of our country.

This email address is being protected from spambots. You need JavaScript enabled to view it. 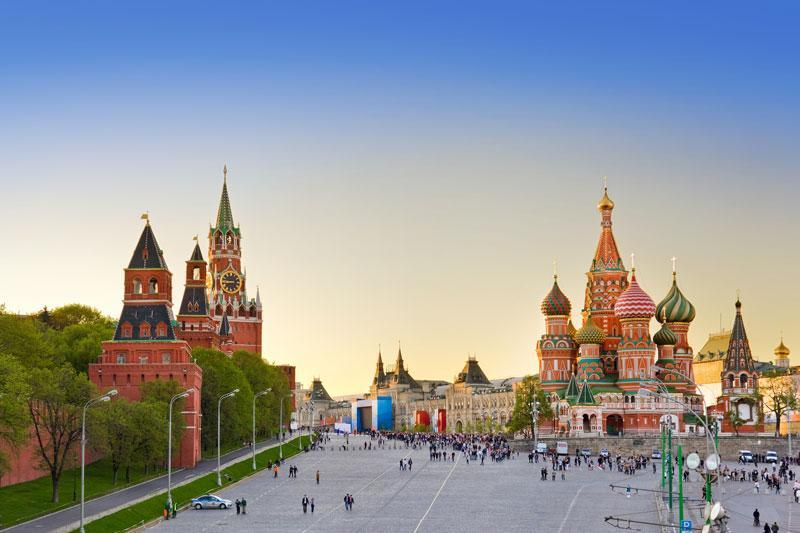 Irkutsk
A Siberian city of grand arctic elegance, Irkutsk offers visitors wintry delights. Ice palaces and sculptures are the main attraction, while classic Russian palaces are of interest to those wanting to know more about the city's history.

Moscow
Moscow, known for Saint Basil's Cathedral, the Russian ballet, and its famous Zoo, Moscow is essentially the heart of Russia. It has a rich and varied past - which far predates the era of Soviet rule. Ancient cathedrals are being restored, theatres and traditional markets are coming back to life, Moscow has become an exciting incentive destination.

Moscow River Cruise
This river voyage links the great imperial cities of the Czars, Moscow and St Petersburg. Moscow, the medieval and 20th-century capital, has a wonderful heritage of historic buildings, while Saint- Petersburg, the creation of Peter the Great, benefited from the inspiration of Europe's greatest 18th-century architects and craftsmen.
Rewarding days will be spent in each of these great cities, and, in between, we will cruise the intricate pattern of connecting rivers, canals and lakes that link Moscow with St. Petersburg. You will sail through enchanting countryside and witness firsthand the tranquility and beauty which has inspired writers and musicians for centuries. On the way the stops are made at the following ancient Russian towns: Uglich, Kostroma, Yaroslavl and Kizhi Island.

Novgorod
One of the oldest towns of Russia founded in the 9th century, the city is situated on the bank of the river Volkhov. For centuries the city played an important role in political an historical life of Russian state. The Kremlin is the major attraction of Novgorod with the Cathedral of Saint Sophia build in the 11th century, which is one of the most ancient cathedrals of the Russian Federation.

Solovetsky Islands
The Solovetsky Islands are the peaks of the ancient cliff. In winter polar light can be seen here and summers are famous for their white nights, when the sun hardly leaves the sky. There are over 550 species of plants in Solovki. and Beluha white whale has chosen the costal waters of Solovki as its home. At one time, people believed that the islands were situated on the border with the other world. In \the 15th century a monastery appeared on the site of the ancient sanctuaries. Five centuries later those buildings were included on UNESCO International Heritage list. We offer tours to Solovetsky islands for nature lovers and those who like active leisure. It is the unique chance to see white whales in nature on Solovetsky islands in the period from May till September.

St Petersburg
St Petersburg is one of the most beautiful cities in the world, with overwhelming culture and history on display everywhere. From splendid palaces to grand museums, from the White Nights festival to excellent theater and ballet productions and concerts on magical winter evenings, the city offers a vibrant cultural life that is second to none.

Transsiberian railroad
The Transsiberian main railroad is known in the world as one of the most exciting and unusual journeys with the length of 10,000 kilometers. It stretches from Moscow to the Pacific Ocean in the Far East. The train passes 20 of the most beautiful cities in Russia, beautiful forests, steppes and 7 time zones. The Transsiberian Railroad crosses the largest rivers of Europe and Asia and passes the unique and the largest freshwater lake in the world Lake Baykal.

Valaam Island
Valaam Island, is part of Ladoga Lake - the largest lake in Europe. This beautiful island has picturesque bays and and stunning nature.In the remote past there was a place of the Pagan Gods worship on the island. Many monasteries (10 all together) were founded on the island. Every monastery has its own beauty. St. Herman of Alaska, the first Saint of the Orthodox Christian America, came from the community of Valaam cloister.
Today the monastic life continues and it's possible to visit the Main Farmstead and monasteries.

Vodka is the most loved Russian drink, and appeared over a millennium ago.  It is a fact that in no other country you find so much vodka produced and consumed than what you find in Russia. During the tour guests will get acquainted with the factory and history of vodka and see vodka making process.

The guide informs guests about the distillation process of vodka as they go past the different sections. In these processes from water, sugar and grain create a fine end-product. At the end of the tour group will be invited to the „tasting room‟ where they can smell the variety of flavors of the different vodkas and will have chance to try just made vodka.

Russian Rhapsody DMC -
A country with that many possibilities demands a DMC that has the creativity to use these extremes to the fullest. At Russian Rhapsody, we cannot wait to show you what we can do for you and your clients.

Our professional project managers are very motivated, creative and easy to work with. If you need an out-of-the-box idea for Russia, please let us know and we will get right on it!

Welcome evening at the Palace of the Tsars

After some time at leisure at your hotel, we will make a short drive to the Palace of the Tsars! When the Hermitage is closed for public, we will have an exclusive tour of the museum by night! At the end of this tour a glass of sparkling wine and a classical quartet music are waiting for us.